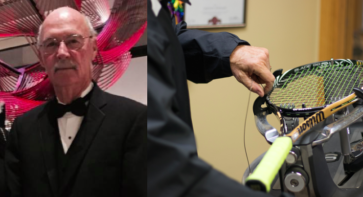 Columbia Basin Racquet Club values its members and staff. Once a month, the blog will spotlight someone from the CBRC family to give readers an inside scope of the people in the community at the premier health club in town.

Meet Dan Gleason, CBRC’s USRSA-Certified Stringer. Dan has worked at CBRC for the past 22 years. His current position includes making visitors and new members feel comfortable and confirm that CBRC is the right club for them, while also meeting all of our members stringing needs with synthetic or polyester strings.  He also works with grips and accessories. Not only will you find Dan stringing racquets but he also plays tennis and works out at the club.

When asked why do you continue to work out at CBRC, Dan says, “I love coming to the club to meet old members and new members. I really like tennis and I still like to work out and stay in shape.” Dan would recommend the club to anyone because, “CBRC is a great club; you can meet new people, generate new friends and feel good doing it.” Even though he loves to make new friends, the tennis community remains his favorite part about the club.

Dan has lived in the Tri-Cities for 41 years. He is a graduate Marine Engineer and spent a number of years in the Marine Industry and Nuclear Industry. Dan says his favorite part about living in the Tri-Cities is, “I can almost never go anywhere in the Tri without running into people I know.” He has stayed involved in the community by serving as the past president of his neighborhood’s home owner’s association.

If you do not see Dan at CBRC, you might spot him at one of his favorite restaurants in town. He enjoys dining at Budd’s Broiler, Italianos, and Anthony’s. We asked Dan, if you could be doing anything in the world for the next week, what would it be? He said, “Come to CBRC, hang out with friends, play tennis and hang out with grandchildren.” Responses like this really shows how special of an impact the club has on its members as well as the staff who support it.

As you may know, CBRC has a member, Al Boston, who is turning 100 years old next month. Al happens to be a good friend of Dan, since they are both part of the tennis community. Dan describes Al as his hero and says “I want to be like him and play tennis like him. If you hit the ball anywhere around him, he’ll get it back for a winner.” Dan also told us about how they are working together, “Al and I are working to get our seniors’ tennis group back to being active.”

Dan is a great example of the kind of staff who work at CBRC. Feel free to reach out to Dan, if you need help with your racquet or to challenge him in a tennis match!

Thanks, Dan, for being part of the CBRC family!