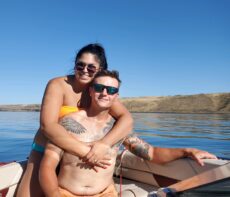 For Ben Bush, Columbia Basin Racquet Club isn’t just a place to exercise. It’s a place that helps him maintain his positive outlook on life. He joined CBRC in June 2019 not just because it’s close to where he lives, but also because he “believes in the importance of physical exertion – without it, anxiety and depression tend to find a way into your life the same as belly fat.”

He hasn’t participated in many of the group exercise classes since joining, but he takes advantage of the highly-versatile free weight section and enjoys an occasional game of pick-up basketball. Because the free weight section is next to the indoor track, he’s also able to “integrate more cardio into my workouts.”

Ben’s focused attitude is evident at the gym and in his personal life. He moved to the Tri-Cities in 2018 after transferring from Walla Walla Community College to Washington State University Tri-Cities.

He’s majoring in business administration and will earn his bachelor’s degree in May 2021. In addition to being a student, Ben also works in the campus’ Veterans Center.

His favorite part of living in the Tri-Cities is the easy access to the Columbia and Snake Rivers and he’s determined to shed five pounds of fat before boating season begins this summer. Ben’s consistent fitness routine will help him meet that goal.

He’s always managed to go to the gym once or twice a week, but since joining CBRC he works out at least four times a week. The fact that there are plenty of squat racks and benches ensures that he always has access to the equipment he needs.

While Ben tends to focus on his solo workouts, he appreciates the environment and staff at CBRC. “It’s nice going to a place where they know your name and are always in a good mood.”

This sense of community is something Ben values. He served in the United States Marine Corps and continues to give back and finds personal satisfaction by volunteering with several veteran organizations. Hanging out with veterans through his support of Heroes on the Water, an alternative therapeutic program to support veterans and active-duty military and their families, Vet Corps, and Vets on the Green “gives him “a sense of the brotherhood that I’ve missed since leaving the Marines.”

Ben’s commitment to his health and veteran community is a reflection of how he approaches life. He says, “I’m always thinking of ways to be better, whether that is in the gym, at work, or on the golf course. I think that everyone should take the time to reflect on what they have been doing, and what they can do to make it better. Life doesn’t take it easy, why should you.”