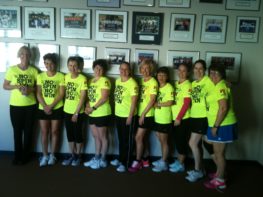 For Kate McAteer, the best part of every Monday is when she “leaves work to go hit little yellow balls at the Columbia Basin Racquet Club.” She gets together with good friends who know her care about her both on and off the tennis court.

Kate joined CBRC nearly 20 years ago when she moved to the Tri-Cities from Seattle and it’s been a consistent part of her family’s life. Her kids celebrated their birthdays there, took swimming lessons, and picked up their first racquets before they were five years old.

Her favorite part of being a CBRC member is the friendships she’s formed.  Several of her friends, like Sarah and Signe, keep her focused because they know the strengths and abilities she brings to the court. She says playing with younger and newer members, like Elizabeth and Rathini, keeps her on her toes.

In addition to playing tennis, Kate uses free weights and elliptical machines regularly and is at CBRC three to four days a week. The flexible hours work well with her hectic schedule, and she benefits from personal attention. Starting last year, she began working with personal trainer Mark Leuschen for tennis strength training.

Her goal was to increase her core strength and prevent injuries. Because of her hard work, she has more stamina and mobility, can hold a plank for longer, has more powerful overheads, and no longer suffers from tennis elbow.

Kate benefits from the one-on-one attention from training but is looking forward to team coaching with the tennis Pro Staff.  It’s been a while since her women’s USTA team has worked together with a coach, but they want to hone their competitive edge.

She says those lessons with Pro Staff is one of the reasons CBRC teams do so well in local and United States Tennis Association tournaments. Practice and coaching have paid off in the past. In fact, in 2003 her team was the Pacific Northwest champions and then went on to play in the Women’s USTA National title at the 3.5 level.

The Pro Team staff didn’t just help her win on the court. They also support her family. Her daughter has taken tennis lessons, and has played competitively in school. Staff like Patti Kirch and Will Taylor have been instrumental to her success, even cheering on their students at high school matches.

She loves the competition but the camaraderie is what motivates her. She says the sense of community reminds her of where she grew up in a small village in Ireland. She even brought a bit of Ireland to her team name, The Shandy Sistas, after the Irish beer they enjoyed drinking after hard practices. Because she gets to know her teammates so well and also sees them outside CBRC, she works extra hard to do well, and of course, win.