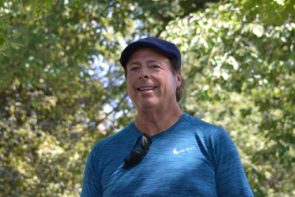 Columbia Basin Racquet Club values its members and staff. Once a month, the blog will spotlight someone from the CBRC family to give readers an inside scope of the people in the community at the premier health club in town.

Meet Todd Samuel, CBRC member since 1982. Todd earned a Bachelor of Science degree in Business Administration in 1993 and a MBA in Engineering & Technology Management from City University of Seattle in 1996. Todd has worked at Battelle – Pacific Northwest National Laboratory (PNNL) since 1996 and is currently the Group Manager of the Energy Policy & Economics Group in the Energy and Environmental Technology Directorate of the laboratory.

Todd enjoys going to CBRC and continues to be an active member because, “For a tennis player in the Tri-Cities CBRC cannot be beat for quality of facilities (cooling in summer, heating in winter), friendly and knowledgeable tennis staff who are active in arranging tournaments, socials, and practice events, and a membership that is focused on having fun and competing hard.  It is just a great combination!” He also recommends CBRC to “the tennis player of Tri-Cities.” Todd says, “Being able to enjoy tennis year-round in an environmentally controlled indoor space cannot be beat in our area!  But, it is really the attitude of the staff and the members that make CBRC a special place to make friends, have fun, and improve your tennis skills and overall fitness!” Well, Todd, the club feels the same way about you!

Todd said his favorite part about the club is, “The heated and cooled tennis courts, the newly renovated locker rooms, and the friendly, fun, welcoming attitude of staff and members!” He loves the club so much that when asked if he could be doing anything in the world for the next week, he responded, “Playing tennis with our CBRC 8.0 Men’s or Mixed Team at USTA Nationals.” As you can gather from his responses, Todd is a very dedicated tennis player.

Todd has lived in the Tri-Cities for the past 36 years. He stated, “I really value the affordability, the minimal traffic, and the availability of high quality indoor tennis facilities (really hard to beat, better than anywhere else I have traveled to).” Todd is heavily engaged in the community and sits on several boards in town, including Benton-Franklin Workforce Development Council, Franklin County Law & Justice Advisory Committee, and Franklin County Solid Waste Advisory Committee… to name a few. Aside from his volunteer roles, Todd also serves as an Adjunct Professor in the School of Management and Business at City University of Seattle. If you are ever looking for Todd, you might also find him at his favorite local restaurant, Anthony’s at Columbia Point.

Todd is a great example of the type of member in the CBRC family. Feel free to join the tennis community at the club and challenge Todd to a tennis match! To learn more about tennis at CBRC, check out the webpage here.

Thanks, Todd, for being part of the CBRC family!